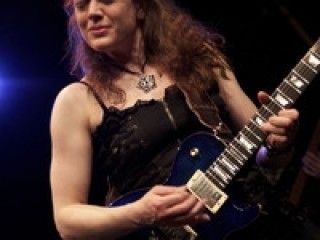 Clare Free is an artist who is redefining the blues for the modern world.

Her roots lie in the blues but her influences go way beyond the genre making her one of the most exciting new artists writing and performing in the blues world today. A passionate, award nominated, songwriter and a fabulous guitar player, she plays both with a band and solo. Clare’s performances are fiery, exciting and heartfelt.
Clare is one of the freshest, fastest rising stars on the UK Blues circuit - but success didn’t come overnight. Clare served her time with bands including Misdemeanor (With Matt Schofield, Maurice McElroy and Constance Redgrave of Spikedriver fame) she guested with Larry Garner and joined Dana Gillespie on two trips, one to India and the other to be the opening act at the Mustique Blues Festival every night for three weeks. Later Clare joined 99lbs.

Then, having finally made the decision to go it alone, she released her debut solo album “Be Who You Are”. A self-penned mixture of Blues, Rock and Country it propelled her into the limelight, and newly released “Dust and Bones,” which is recieving massive critical acclaim, will keep her there. All four tracks from the 2010 EP “How It Is” also recieved rave reviews and made it into the Top Ten in the Blues Charts with international distributor CD Baby and saw one track nominated for both the British Blues Awards (Kevin Thorpe Award for the Best New UK Blues Song) and reach the final of the People’s Music Awards. She has won the WRC Award “Best Acoustic Performance of 2011” and this year has seen her nominated for Best Female Vocalist in the British Blues Awards 2012.

In the last year Clare has had tracks played on BBC Radio 2, BBC Three Counties, BBC Oxford, BBC Radio Cambridgeshire, BBC Radio Norfolk and a host of online radio stations. She has been featured in Guitar and Bass Magazine, PlayMusic Magazine, Gear Magazine, Blues in Britain, Blues Matters and, over in the USA Blue Monday Monthly and Guitar International Magazine.